In April of 2015 on the corner of 28th and U streets in Sacramento, California, Jenn Ponci noticed some pretty terrible graffiti on the building across the street from Side Show Studios. Tattoo clients, art patrons, and artists who came into the space all had something to say about the pictures that appeared on the grey wall. 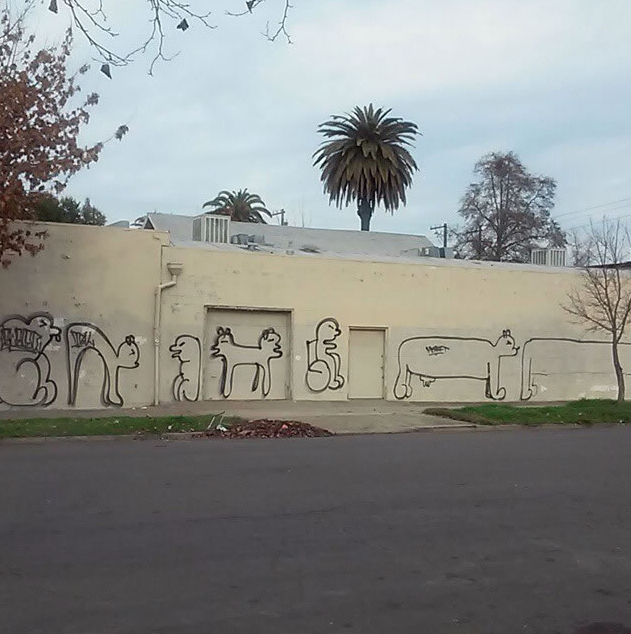 For years that building, unused by it’s San Francisco owners, was repeatedly vandalized, painted slate grey, and vandalized again. Ponci decided to take matters into her own hands. When attempts to contact the property owner failed, the local residents and neighbors were solicited for their thoughts on asking professional artists to tackle the project.

Everyone agreed it would be an improvement, but no one wanted to contribute, so artists Kove, Sole, Ponci, Begr, Pier, Meme, and Shaun Burner began investing hours of work and over two thousand dollars in materials towards this production. Unfortunately, nearly halfway through the process, one uptight, non-contributing neighbor sought out the assistance of the Sacramento police department to stop this (apparently heinous) act from coming to fruition.

The police and Ponci discussed the benefits and downfalls of the artwork, yet they demanded further attempts to gain permission from the building owner. The police tracked him down, and prompted by threats, he contacted Ponci. He agreed that thought-out imagery with time and energy invested was definitely better than the images that repeatedly appeared on his building. Living in San Francisco where art culture is vibrant, he wasn’t opposed to the lettering on the wall, either.

With the featured artists done with their pieces, Ponci resumed the project. She started on the higher parts of the wall to add background and tie all the work together. 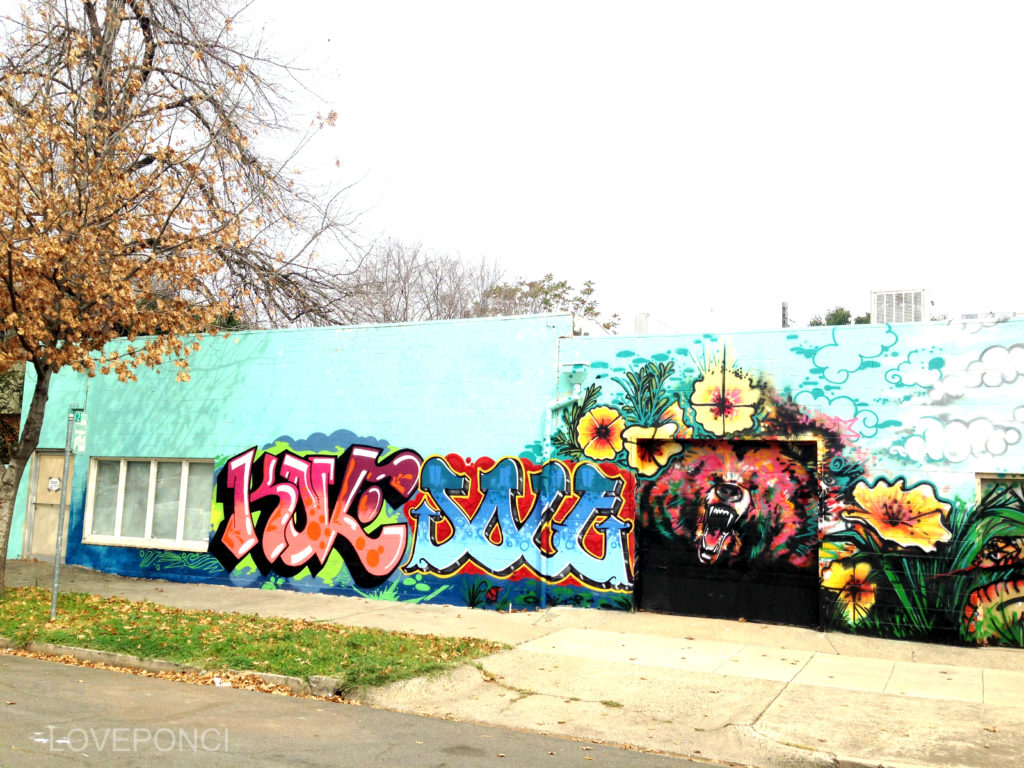 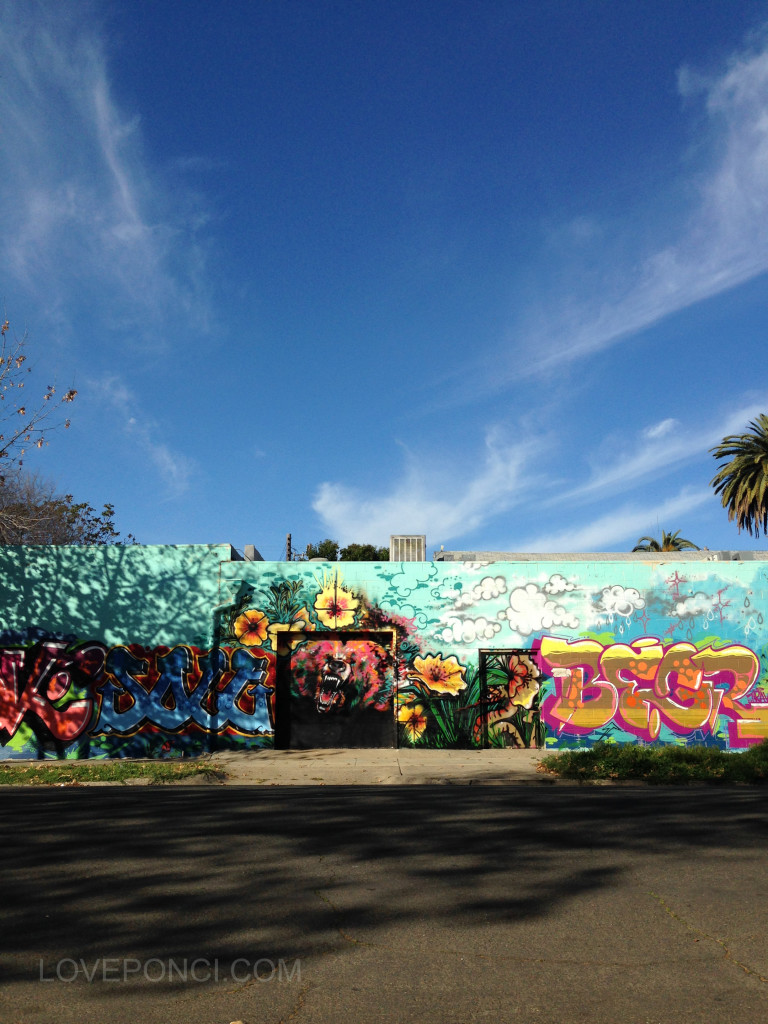 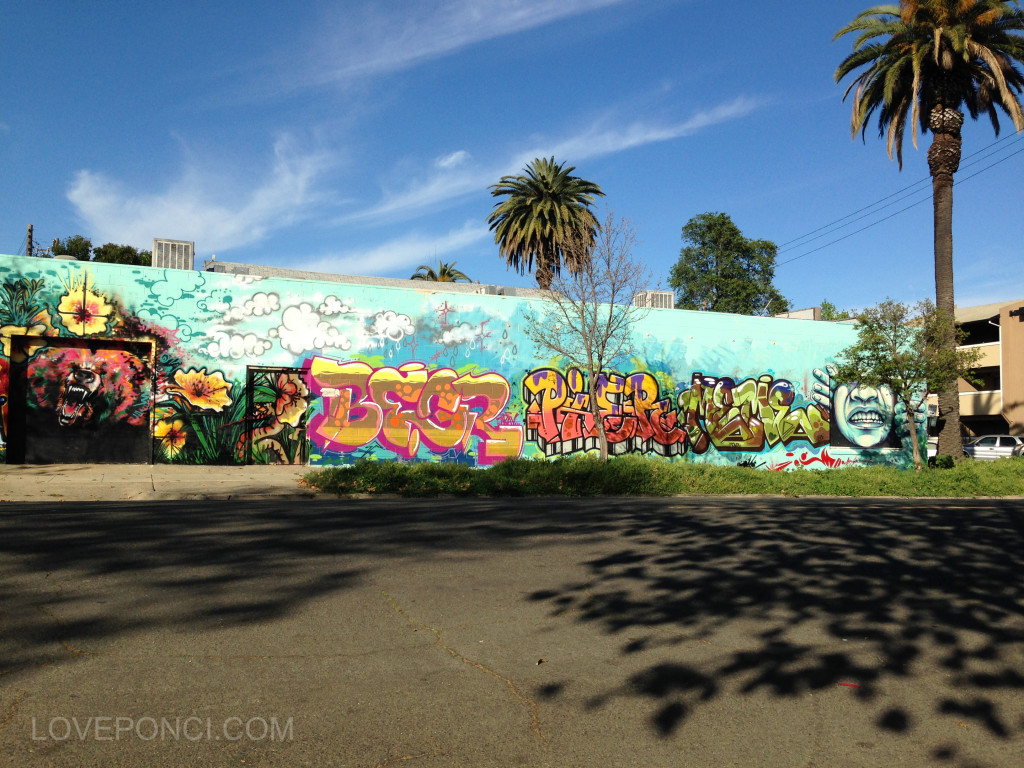 After more than 75% of the project was complete, the Sacramento PD made it very clear they were not going to accept the owner’s or the community’s permission for the mural. They didn’t approve of the content, or the artists on the wall, and felt the slightly unorthodox method of community service was worse than the slate grey that preceded it. The city demanded Ponci cease progress on the artwork, charged the property owner $500, and called it vandalism. This fee was intended to be handed down to her for collection, however the slum lord did not follow through with that statement either, despite being bullied by the police. The mural was destroyed before the community could voice their opinion on the controversy.

It’s interesting how quickly the city covered this colorful art donation. An overwhelming majority of local residents and business owners told the artists their work was an inspiring, uplifting, and therapeutic solution to a previously unsolvable problem. Before the project started, the offensive, poorly-executed graffiti, applied with zero consent or permission, would easily be on display much longer than the mural was, offending almost everyone while decreasing their pride in the town where they live.

Residents and business owners of the neighborhood said many positive things about the murals process, the vibrancy, and the images. They enjoyed the vibe of the wall and the history of the artists who contributed. Some just wanted a colorful backdrop for their selfies, and everyone agreed unanimously that the art was better than the grey wall.

Ponci discussed with local businesses the idea of re-painting the wall in the future with support from the community. This would include getting contributors to pay the artists or provide supplies, and depending on their level of contribution, their input would be considered in the content. This concept never came to fruition, however, since the city demanded the property owner retract his permission to paint the wall.

The mural had been featured in the Sacramento News and Review as part of a mural-walk, which would bring new traffic to the neighborhood and contribute to the local economy. Unfortunately, by the time the issue came out, the wall was solid grey. In Sacramento, it’s common to hire artists from other major cities instead of supporting the contributors who have been pushing it’s own art movement since the beginning. Many comments about the removal of the art reflected outrage that the city spends millions on other town’s artists, and simultaneously punishes local ones.

For the police department, it was important to put an end to this contribution and threaten repercussions, while they happily represented the angry minority. For the community, it’s depressing that dedicated and focused local artists are not only dismissed when commission jobs are available, their donations to the community are painted over and condemned. Meanwhile, the city flies in artists from other cities to reap the benefits of paid work. There is a lack of gratitude in Sacramento when the people who have the resources to support the arts would rather buff and punish the ground-breakers than give them any credit or resources to grow. Perhaps the artists they outsource jobs to had the kind of support in their home towns that gave them the lift they needed to rise.

Always remember to support and appreciate your local artists, everything they’re doing is to inspire you, whether they are getting paid to do it or not. The money will contribute to the quality of the work, and quality of life for the artist. There’s only so much a talented, inspiring individual can donate before they have to worry about getting a low paying job to put food on the table instead. Artists tend to struggle in this society for reasons like this, yet still give their meager belongings freely- especially for the arts. For this reason, it’s important to hire them when you have work, and treat them with the same respect as you would someone in another profession. If all you have to offer is gratitude, however, that will always make a positive impact.

The fox 40 news article by Marin Austin can be read here:

City Paints Over Artistic Mural in Midtown After Receiving Complaints